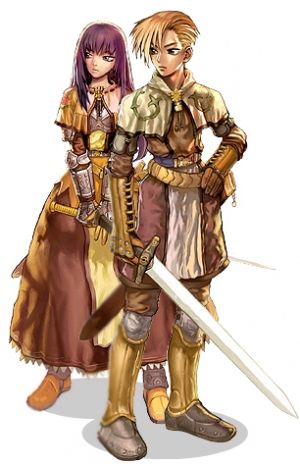 Swordmen are honest and as stubborn as the strong waves of the ocean. With strong physical attacks, defense, and a sense of command, a Swordman can become a headstrong leader to others. Swordmen continuously train to gain more skill and strength.

After reading King Tristan 3rd's official notice recruiting adventurers, Swordmen join with the hope of becoming ever stronger. Equipped with strong armor and weapons, the brave swordman joins the world of adventure.

Once you reach Job Level 10, head to Izlude and enter the Swordman Guild on the west side of town (izlude 52,137). Talk to the Swordman NPC in the center room behind the desk, who changes your job to Swordman. You will also be rewarded with a Novice Falchion.

Swordmen can use many weapons in Ragnarok Online, but only a few of them are suggested for use. The equipment and weapons will change once the Swordman has become a Knight or Crusader.

Daggers: ASPD of these weapons are good as a Swordman, but they inflict less damage on medium and large monsters compared to a One Handed Sword. Nonetheless, daggers inflict 100% to small monsters. Daggers can also be used with a Shield, as Daggers are one handed.

One Handed Swords: They have the same ASPD as daggers, and they also inflict more damage on medium monsters. Nonetheless, the ASPD becomes better than that of a dagger after becoming a Knight or Crusader. One Handed Swords can also be used with a Shield.

Two Handed Swords: These are not the best choice for a beginning Swordman since the ASPD is very low and a shield cannot be worn with one equipped. However, they can be used with a Knight's Two Hand Quicken skill.

Spears: Swordmen rarely use these due to having the lowest ASPD of all weapons a Swordman can use, unless to take advantage of their range to attack steady enemies from afar. However, One Handed Spears are great for Knights, while Two Handed Spears are good for a Crusader's Holy Cross skill.