Defense is the total physical defense that is factored upon physical damage, which is generally based on ATK as whole or partially. However, there are exceptions.

The descriptions used here refer to Hard and Soft DEF. These names are used for clarity. The vast majority of players do not use these terms in general conversation, and instead refer Armor Def (hard) and VIT Def (soft). Hard DEF works as a relative reduction, whereas Soft DEF is a subtractive reduction.

To obtain the final damage,apply Hard DEF first and then apply soft DEF. 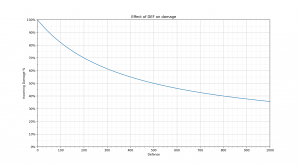 Hard defense has a base value of 0, and is increased by equipment, some skills, and items.

Monsters use a different SoftDEF formula.

The skills and equipment below are known to either bypass DEF, or have a reversed effect, thus increasing damage from the amount it.

Skills that work with the above weapons include:

In special conditions, such as for the Occult Impaction skill or item that grants its effect like Ice Pick or Memory of Thanatos Card, the DEF formula is altered. These skills and items ignore hard defense and soft defense, and also add additional attack depending on the target's hard defense. Defense bypass gears in any other form outside of an Occult Impaction effect only bypass hard defense.