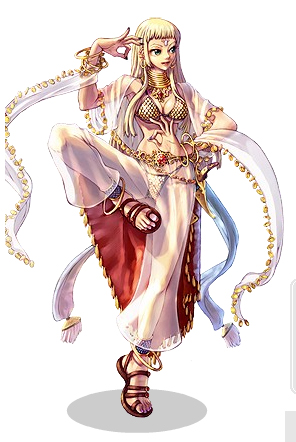 Dancers are the epitome of beauty and grace, and they use these qualities all to their own advantage. They allure allies and enemies alike with their performances. Needless to say they are not damsels in distress when it comes to fighting monsters, they can still hold their own using their previous training as Archers, or use whips altogether to put them in place.

Dancers are considered a support class that have special abilities that allow them to improve their allies abilities or disrupt enemies. They have skills however that would require them to pair up with their male counterpart Bard to execute the so-called ensemble skills. Dancers could use whips, daggers and bows, though most of the dancers skills would require them to wield a whip. When wielding whips however, bow skills cannot be used, bringing both weapons when venturing will be a good measure.

Dancers are still more of a ranged type of class, even when whips require you to be close and personal with your targets, DEX is the main stat for weapon damage (pertaining to both bow and whip). The solo dances are influenced by the skill level, the level of Dance Lessons and the stats of the dancer. Ensemble skills would require both a dancer and a bard to have the skill learned and be in a party. Being a performer in contrast to hunters, Dancers have a larger SP pool, allowing them to use more skills than usual. As a Dancer, only whips, daggers and bows are available for weapons, whereas Bards can use instruments instead of whips.

Dazzler and Charming Wink are usable regardless of weapons.

Requirement: Female Archer who has reached both base and job 50

Dancers are an interesting class due to having access to two very different weapon types, the Whip and Bow.

Whips allows for easy access to strong supportive Performance Skills as well as the dancers strongest single target skill in Slinging Arrow, a shield can also be equipped alongside a whip for additional defence.

Bows on the other hand are a good choice for safely auto-attacking enemies from long range, bows are also necessary to use the only AoE skill dancers have access to in Arrow Shower. Although a single cast of Double Strafe doesn't hit as nearly hard as Slinging Arrow does, with high enough ASPD Double Strafe can be spammed much quicker.

Keep in mind that you do not have to limit yourself to just one weapon type. Having both weapons on hand is often a good idea so that you can switch freely to adapt to any situation.

Slinging Arrow has a very low SP cost and deals significantly more damage than Double Strafe making it ideal for leveling. Binding Level 1 Slinging Arrow alongside Level 5 can be a good idea when SP is scarce since it only costs 1 SP (Level 5 costs 9) and still hits quite hard. Gypsy's Kiss is the most popular Dancer song for PVM purposes, as it lowers the SP cost of the party and is the most universally helpful. Lady Luck provides a large damage bonus to CRIT based auto-attacking characters and is also a prerequisite for Mental Sensing. Mental Sensing is the most popular Ensemble skill, giving a large experience boost to the entire party when grouped with a Bard. DEX improves damage for any offensive skills. INT is helpful for upkeeping SP. VIT is necessary for survivability / HP pool. AGI is optional. Some Dancers may also already have AGI from leveling as an Archer for the ASPD / FLEE.

The Archer skill Arrow Shower is the only AoE accessible to a Dancer, but still offers decent damage. With HP Healing Items, this build can AoE level very effectively and quickly. This build can actually have similar or identical stats with a slinging arrow/support oriented build, and it is simply the equipment that differs. Double Strafe still offers respectable single target damage output but tends to be less than Slinging Arrow.

This build is generally recommended for newer players with less funds. This Dancer build is specialized in left click auto-attacking single targets from long range with a Bow, which uses minimal HP / SP Healing Items. Note that Double Strafe can be spammed quicker with higher AGI (and ASPD as a result) as well. This allows for lots of burst damage at the cost of substantial SP. Lady Luck is an excellent song for improving your auto-attack damage with this build but will require a quick weapon switch to a Whip then back to the Bow each time you want to cast it.

Ensemble skills need the two performers to be within 9x9 range of each other. After casting an ensemble skill both performers suffer from Ensemble Fatigue for 30 seconds, this slows down their movement speed and attack speed, as well as blocking them from using other skills except Melody Strike or Slinging Arrow. When an Ensemble skill is performed by a Bard and Dancer, the lower level of the Ensemble is performed. (i.e. when a Bard that has learned Acoustic Rhythm Lv.5 performs the skill with a Dancer that has only learned Acoustic Rhythm Lv.3, the Bard and Dancer will perform Acoutic Rhythm Lv.3)