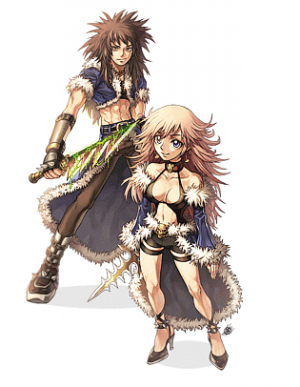 If you're being pursued by a Stalker, you'd best give up all hope of escape. They specialize in spying, sabotage and stalking, stalking, stalking! They are completely undetectable unless they want their prey to know they were after them—a form of mental torture they relish. The thrill of the chase is personified in the elusive Stalker. And if you get the ridiculous idea of capturing a Stalker, save yourself the trouble and simply accept defeat.

A Stalker is the Transcendent variant of Rogues. Most melee classes try to avoid them like the plague in fear of getting fully divested and then clobbered by one of their many copied skills during WoE. Stalkers are geared more towards PvP and WoE, however most builds can do PvM just as well.

Their main forte is the now improved intimidating capability. They can opt to keep any skill gained via Intimidate by simply casting Preserve. Most prefer to intimidate Bowling Bash, it works well with most of their builds. One of their other favored skills is Storm Gust being cast at its lowest level, which -usually executed after Divest Armor or Full Divestment- will render most targets immobile in PvP environment.

Their stealth capability also has been improved thanks to the skill Stealth, complementing Stalk well. Although being prone to AoE skills, it makes the caster impervious to detection skills like Sight while also being able to move relatively faster than during stalk. This makes Stalkers one of the two most preferred classes (the other being the Assassin Cross) for guild leaders, by utilizing Urgent Call behind enemy lines after successfully avoiding detection. Slap on a Guard of the Deaf that will render them immune to magic, and they are nearly unstoppable in their tracks.

Preserve allows a Stalker to use copied skills without potentially losing it.

Full Divestment is used for endgame purposes in PVP and WoE.

ASPD values do not change after transcending. See Rogue (ASPD).