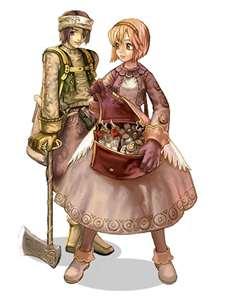 Always on the lookout for profit, Merchants are the economic experts of Ragnarok Online. Setting out to make a fortune, playing as a Merchant will allow the player to get the most out of every last zeny. Merchants are also handy with items, being able to carry far more than other classes thanks to their Enlarge Weight Limit and Pushcart abilities.

Although a Merchant is bound to feel more at home at the marketplaces and auction houses of Rune-Midgard, they can still hold their own in battle, specially when it comes to defending their wares. Inherently sturdy, Merchants are able to equip most of the game's heavy armor and melee weapons, allowing good defense and decent attack.

After a life of buying and selling items, Merchant second jobs provide the possibility of making their own. Merchants can choose to change into a Blacksmith or an Alchemist at Job levels 40 to 50.

Starting stats for merchants depend mostly on whether the player wishes to make a battle-oriented character or concentrate on the stats needed after job change in order to make items successfully. In the first case, a swordsman-like starting build is a good idea, both in its VIT and AGI variants. In the second case, the player should keep in mind that Blacksmiths' forging success and Alchemists' potion mixing depend heavily on high DEX and LUK, as well as INT in the case of Alchemists.

Once you are Job Level 10, head to Alberta and enter the Merchant Guild in the southwest corner alberta3642. Inside, talk to Guildsman Mahnsoo (Merchant) behind the desk, who changes your job to Merchant. You are also rewarded with a Novice Battle Axe [3].

Merchants can use most types of armour available to swordsmen and thieves: standard armour up to chain mail, boots, manteaus and bucklers. They can also wear saint's robes and the merchant-only Lord's Clothes.

Merchants fight with Daggers, One-handed swords, Maces and Axes, however, they do not have any mastery or weapon-dependant skills until they become Blacksmiths or Alchemists.