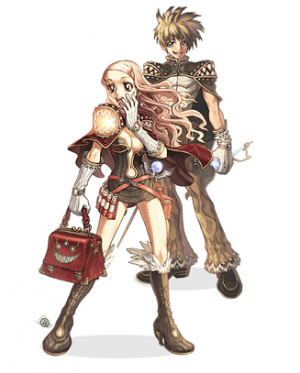 With knowledge comes understanding, and with understanding comes mastery. The Creator's unyielding dedication to research and experimentation have raised them to the summit of scientific knowledge. Now that their proficiency with potions and chemicals is unmatched, they are on the verge of manipulating the very laws of nature!

Creators are a much stronger class than the Alchemists, provided there are sufficient funds and SP for the new skill Acid Bomb (often abbreviated to "AB" or "AD" as it is known as Acid Demonstration on some other official servers.). While Alchemists were more of a melee class, Creators have the option to level with a skill other than Cart Revolution and Mammonite. Many invest a great amount of their stat points into INT instead of AGI, and level with Acid Bomb or magic attacks from weapons (i.e. Fire Bolt through the weapon Fireblend) and Homunculi instead.

Acid Bomb is one of the best (if not the best) MVP killing skills in the game, even when compared with third class skills. Creators can use this skill to kill MVPs even at a low level for high EXP reward without penalty, provided the player has enough damage resistance gear or a friend to tank the MVPs with.

Full Chemical Protection is extremely useful in all areas of gameplay, and can be used to protect both the Creator's equipment as well as any party mate's.

Below are listed the skills that are unique to the Creator class. For more information about Alchemist skills, click here.

ASPD values do not change after transcending. See Alchemist (ASPD).