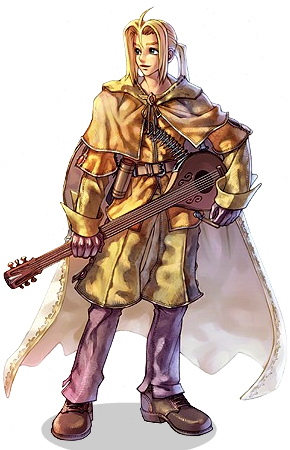 After a life of plucking their bows, many Archers feel the itch to strum strings of a different kind. The Bards of Ragnarok Online are the right choice for the idealists among Archers who wish to change the world with their poetry.

The voice of a Bard is laden with magical harmonies, singing hymns that invoke the ancient Gods of Asgard to instill fear in the hearts of his enemies and inspire his comrades to victory with songs of eternal youth and glorious charges. Where their female counterparts, the Dancers, are more bent on disruption, Bards specialize in support, which make them central in all defensive strategies during the War of Emperium.

Supporting with a Bard or Dancer requires a different approach than other classes. Music-based buffs are mostly percentual values, as opposed to the absolute values of Priest buffs, and require careful strategy and positioning, but playing as an Archer should already provide some experience in this respect. Despite their supportive role, one should not forget that Bards are also capable of dealing good quantities of damage, one of their main advantages over Hunters is their immense SP pool which allows them to continually use Double Strafe instead of normal attacks, ensuring a very nice damage output.

In general, there are 2 types of skills for both Dancers and a Bards; skills which can be sung or danced without a partner of the opposite gender and those where the player needs another Bard or Dancer respectively.

As a Bard, only Instruments, Daggers, and Bows are available for weapons, whereas Dancers can use Whips instead of Instruments.

Unbarring Octave and Pang Voice are usable regardless of weapons.

In order to become a Bard, one must go to Comodo and look for the Roaming Bard. The applicant has to perform various tasks:

Once these have been completed, the applicant will be made a bard by the Roaming Bard.

Bards are an interesting class due to having access to two very different weapon types, Instruments and Bows.

Instruments allows for easy access to strong supportive Performance Skills as well as the bards strongest single target skill in Melody Strike, a shield can also be equipped alongside an instrument for additional defence.

Bows on the other hand are a good choice for safely auto-attacking enemies from long range, bows are also necessary to use the only AoE skill bards have access to in Arrow Shower. Although a single cast of Double Strafe doesn't hit as nearly hard as Slinging Arrow does, with high enough ASPD Double Strafe can be spammed much quicker but at a considerable cost to SP.

Keep in mind that you do not have to limit yourself to just one weapon type. Having both weapons on hand is often a good idea so that you can switch freely to adapt to any situation.

Melody Strike has a low SP cost and deals significantly more damage than Double Strafe making it ideal for leveling. Using Level 1 Melody Strike alongside Level 5 can be a good idea when SP is scarce since it only costs 1 SP but still hits quite hard. Magic Strings is the most popular Bard song for PVM purposes, as it substantially lowers cast times for all party members. Song of Lutie can also be a strong alternative when facing strong enemies that threaten to kill your party very quickly. Mental Sensing is the most popular Ensemble skill, giving a large experience boost to the entire party when grouped with a Dance. DEX improves damage for any offensive skills. INT is helpful for upkeeping SP. VIT is necessary for survivability / HP pool. AGI is optional. Some Bards may also already have AGI from leveling as an Archer for the ASPD / FLEE.

The Archer skill Arrow Shower is the only AoE accessible to a Bard, but still offers decent damage. With HP Healing Items, this build can AoE level very effectively and quickly. This build can actually have similar or identical stats with a melody strike/support oriented build, and it is simply the equipment that differs. Double Strafe offers respectable single target damage output but tends to be lower than Slinging Arrow.

This build is generally recommended for newer players with less funds. This Bard build is specialized in left click auto-attacking single targets from long range with a Bow, which uses minimal HP / SP Healing Items. Note that Double Strafe can be spammed quicker with higher AGI (and ASPD as a result) as well. This allows for lots of burst damage at the cost of substantial SP. Impressive Riff is an excellent song for improving your auto-attack damage with this build but will require a quick weapon switch to an Instrument then back to the Bow each time you want to cast it. Perfect Tablature Is another solid choice when you want to really stack your FLEE as high as possible.

Ensemble skills need the two performers to be within 9x9 range of each other. After casting an ensemble skill both performers suffer from Ensemble Fatigue for 30 seconds, this slows down their movement speed and attack speed, as well as blocking them from using other skills except Melody Strike or Slinging Arrow. When an Ensemble skill is performed by a Bard and Dancer, the lower level of the Ensemble is performed. (i.e. when a Bard that has learned Acoustic Rhythm Lv.5 performs the skill with a Dancer that has only learned Acoustic Rhythm Lv.3, the Bard and Dancer will perform Acoutic Rhythm Lv.3)