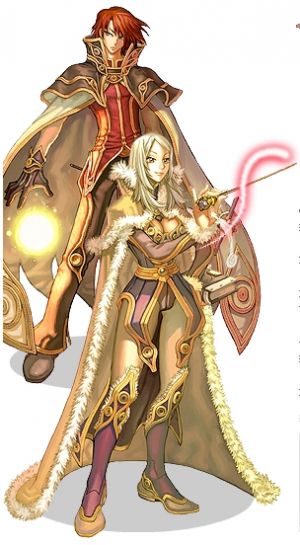 Wizards strive further to hone the power of the elements, as a result they have obtained knowledge on how to use this power on a wider scale. Wizards have access to AOE spells that can be used to dispatch their enemies in groups, as well as learning stronger single target magic. Elemental counter is still an important aspect of a wizard, using the wrong spell could break the party flow when dealing with tough opponents. Wizards could also function as crowd controllers by either keeping them at bay (via Slow, Stun or Freeze) or killing them outright.

Wizards are still limited to using either a dagger or a rod/staff, the latter being the most used. 2-handed staves offer better offense power, as they have higher matk, at the expense of not wearing a shield to reduce incoming damage. 1-handed staves/rods are still used in cases of needing to wear a shield. Casting is more of a problem to a wizard now with the AOE spells having lengthy casting times, so having uninterruptible casting is a crucial attribute for wizards in PVM (doesnt work in WOE settings so you can just skip). INT is the primary stat for wizards so as to reduce both casting time while having higher matk. LUK is optional for its influence on matk as well.

Requirement: Mage base and job 50

There are a large variety of builds in terms of skills. In terms of stats however, there is not much freedom for originality besides using a melee build, which is very unusual and not recommended for new players.

The Equipment article lists some general all purpose equipment that is useful through the PVM phase and also for endgame use as well.

After considering what requirement skills have (some skills can only be used with certain weapon types), the Weapon Search tool within the Control Panel Database is very helpful. Generally, for magic classes, a weapon with high MATK is best.

Most of a Wizard's MATK comes from the weapon, so using high MATK weapons is preferable. Upgrading a Staff / Rod also gives bonus MATK.

Below are listed the skills that are unique to the Wizard class. For more information about Mage skills, click here.