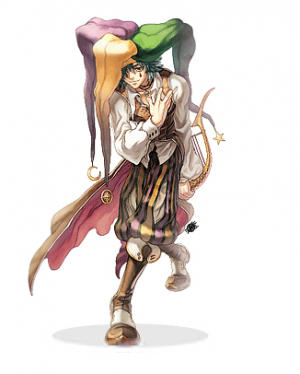 No matter how desperate a situation may seem, the songs of the Clown will inspire you to achieve a miraculous victory. Despite the name, the Clown is a serious factor in any battle—not just because of his ability to keep spirits high but because of his astounding archery skills as well.

Taught new songs by the gods themselves, Clowns are now a powerful class. They are able to enchant the enemy with different music and deal large amounts of damage with Arrow Vulcan skill. Clown can also give half their stats to a supported character enabling the supported fighter to increase their damage. This job is known as Clown in other localizations

Arrow Vulcan: A single target ranged attack skill that requires a Instrument be equipped to cast. This skill is quite powerful, and if using the right Instrument, can kill most enemies in one or two shots early on. Another bonus to using this skill to level is that a shield can be equipped for damage reduction since Instruments are one handed. The downside to this skill is that it has a long skill delay between casts and that it cannot be cast while performing songs.

Marionette Control: This is useful and frequently used for any brewing type of situations like an Alchemist's Potion Creation. Very serious potion brewers will create a Clown or Gypsy purely as a "slave" for brewing with high LUK, DEX, and INT.

Tarot Card of Fate: This skill can be very useful in WoE. Under the effect of Magic Strings it can be very spammable. Not only can this be cast through Pneuma, it also cannot be removed by enemies. It is highly recommended to memorize the cards. This way the player can continuously use the skill until a Death Card comes up.

Sheltering Bliss: This skill can be used in front of a portal in WoE to disable enemies. Worth maxing if using this character for WoE.

Hermode's Rod: This skill's debuff is generally not worth using and it can be a pain to use in WoE.

Longing for Freedom: This skill can be somewhat useful when pairing with a Bard class, but requires some practice to use properly. If moving too far from the other performer, the skill will cancel. Generally not worth investing points into.

ASPD values do not change after transcending. See Bard (ASPD).