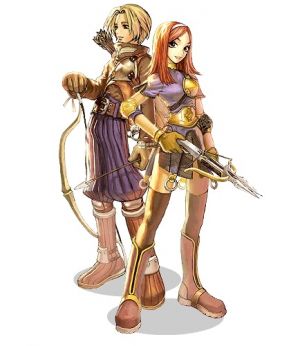 Archers are experts at long-range combat with Bows and Arrows. Their range gives them several advantages, which includes:

Drawbacks of the Archer class include:

Once you are Job Level 10, head to the Archer Guild (pay_arche 145, 164) in the Archer Village north of Payon and talk to the Archer Guildsman (payon_in02 64, 71). He changes your job to Archer and rewards you with a Novice Composite Bow [3], and 1 Fire Arrow, Silver Arrow, and Normal Quiver.

For builds using a bow's long range as a leveling tactic, refer to Sniping Maps for some map suggestions on leveling.

If as a Novice you begun with a lot of DEX, switch to a bow as soon as possible. Initially the startup fee will be high because you will have to buy arrows, but this fee decreases overtime. Any kind of upgrade that increases ATK or DEX is good for an archer. Keep an eye out for Slotted Ribbons, Mantles, Boots, and Mufflers, which are all very common and very inexpensive on the market. Otherwise, start off by hunting Mandragoras and collecting Stems, which are common drops that sell for a comparatively large amount of zeny to other players. Later, you can move on to hunting Floras for Maneater Blossom, which again sell for large amounts of zeny and drop quite frequently from an immobile monster.

Buy Wise Goggles or any Wise headgear. The +80 SP helps with Double Strafe, Arrow Shower, and Improve Concentration. Use upgraded composite bows as soon as you become an archer. At level 18 Archers are able to wield Cross Bows. If you obtain a Cross Bow [3], you have the choice to overupgrade and add cards. Then, switch to Arbalests or Gakkungs as soon as possible (level 33 or whenever funds are available). If you have a decent amount of money, you should be able to find plenty of Gakkungs and Arbalest bows with 2 slots on the market. Ballistas are similarly high level and tend to be overlooked.

For armor and other accessories, look for Tights [1], Bow Thimbles (slotted or unslotted), and Nimble Clips. Any gear that increases DEX tends to fit archers well. However, if you're planning on a build with high ASPD, you may want to look for AGI boosting gear as well.