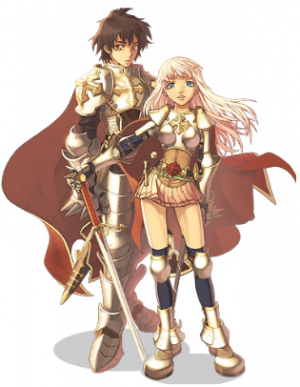 Lord Knights are the Transcendent variants of Knights. The Lord Knight's skills are a good balance of offense and defense. The Lord Knight is now a master of weapons with a special affinity for Two-handed Swords and Spears. A Lord Knight has formidable attack strength and can crush an opponent's defense with ease. Being a Lord Knight, they gain vastly improved offensive capabilities and some defensive capabilities. They easily retain their status as the class with the highest HP Modifier and strongest physical AoE damage dealer.

Lord Knights get the most new skills of the Transcendent Classes: two skills that enhance their damage output, and three skills that deal damage and various status effects. If this isn't enough, they also get (beside the +25% HP) a skill that gives them on-par tanking ability to that of Crusaders in the form of Parry. Their ability to go Berserk unleashes massive damage while in a state of Frenzy. A number of defensive skills complement the Lord Knight's combat mastery.

Clashing Spiral is a new powerful single target skill with a relatively low SP cost. Lord Knights may choose to acquire this skill for killing single targets with, to complement any of the common Knight builds.

Spear Dynamo is actually an extremely useful skill. It has no cooldown compared to Endure, so it can be recast repeatedly. It can also be used for HIT purposes, as level 5 will add a total of 50 HIT.

The levels at which a Lord Knight receives a certain bonus.

ASPD values do not change after transcending. See Knight (ASPD).