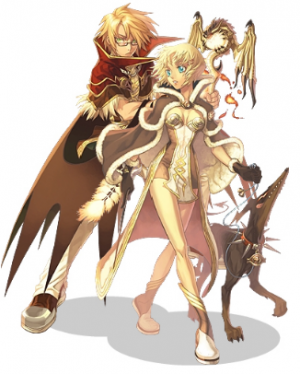 The Mage and the Wizard have been able to tap into mystical and elemental magic but the real power is now fully realized in the spells mastered by the High Wizard. Only a fool would dare challenge the awesome might of a High Wizard's power head on!

A High Wizard has much more power than a regular Wizard, and at a much earlier level as well. Unlike the Wizard, it has Mystical Amplification, which will give 50% more MATK on the next offensive magic skill to be cast.

Ganbantein also has uses in WoE. It can cancel many different spells that are cast on the ground. Such spells include Pneuma, Safety Wall, Battle Chant, and Warp Portal. It rips holes in the Sage class' ground spells as well, so it's good for stopping a Sage or Scholar from getting their Magnetic Earth to work as they desired it to.

Napalm Vulcan has a 25% chance of cursing at max level, and has 5 levels. Very good for cursing opponents in precasts, or just to buy time in general to help some killers get to the tanks in time to stop them. Also useful for fighting even if they had Land Protector on since this skill is not counted as a ground type of skill. In PVM it holds its uses against ghost elemental property monsters or just a nice follow-up in case your target is almost dead.

Soul Drain allows the player to increase current Max SP by 20%, and every time a target is killed (monster) with a single target spell, player will restore SP equal to a certain percentage of that monster's SP. This basically allows the class to have infinite SP stacked on to the High Wizard's already really fast SP recovery rate.

Gravitational Field is a strong neutral spell which enables wizards to combat the forces of holy and shadow elements, as their previous spell set is more or less ineffective when dealing with these 2 elements.

ASPD values do not change after transcending. See Wizard (ASPD).