From Ragnarok Project Zero wiki
Jump to navigation Jump to search
This page is about Zero-exclusive content.
If you don't know what that means, learn more about Zero.

The Kingdom Guild is low-to-mid level content that involves turn-in quests and special Kingdom equipment, meant to give you a head start in your Midgard journey. After you change to your first job, you will receive a quest that leads you to your guild's Coin Commissioner. Talk to them to get your first 2 Kingdom Guild Coins. 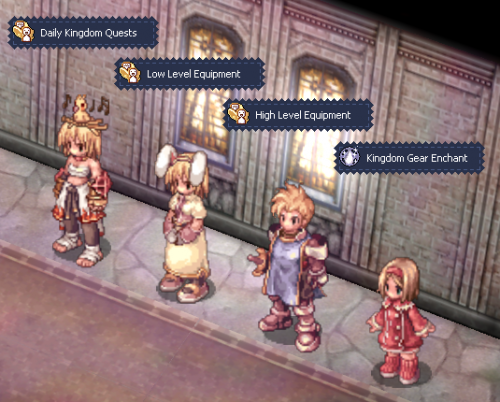 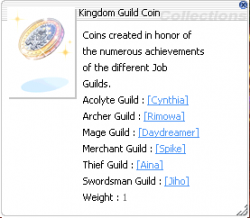 You receive Kingdom Guild Coins by doing turn-in quests for the various guilds across Rune-Midgard. These coins are then used to purchase Kingdom equipment as well as to enchant that equipment.

All Kingdom quests are turn-in quests where you turn in X amount of a certain item. Quests are broken into tiers: Base Level 1, Base Level 15, Base Level 31, and Base Level 41. There are some important things to note about quests:

If you turn in a quest at your respective Job Guild and its the first time you're turning in that quest that day, you get an additional reward. The reward you get depends on the level of the quest. Note that this also stacks with the extra Kingdom Guild Coin reward that you get on turning in a quest for a first time that day.

For example, if you are an Acolyte and you turn in the Grasshopper's Leg quest for the first time that day at the Prontera Church, you would get:

If you turn in the same quest again that day, you will only receive the Base EXP reward. 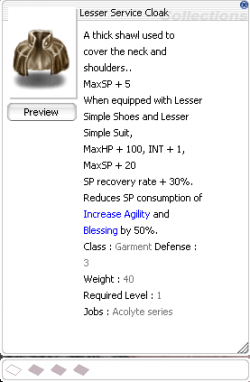 Kingdom Guild Coins can be exchanged for Kingdom equipment. The Kingdom equipment comes in sets of a Garment, Shoes, Armor, and Shield. You can get the entire set of the lowest tier (i.e. Level 1) equipment for 2 Guild Coin. Equipment tiers can be divided by the base level requirement to wear that gear. Thus, there are 6 tiers of gear.

Each piece of Kingdom equipment can be enchanted once. 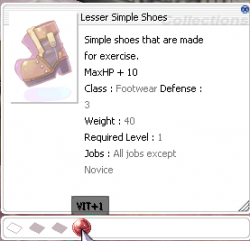 The low-tier equipment enchanting NPC is with the other Kingdom Guild NPCs. Each Job Guild's low-tier enchanting NPC will add +1 of a specific stat to the piece of equipment you select. Any class can use any enchanting NPC at any Job Guild. For example, an Acolyte can go to the Archer Guild to enchant a low-tier garment with +1 DEX. 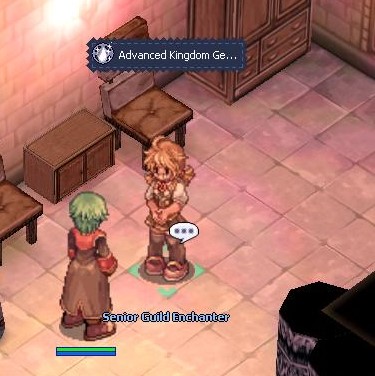