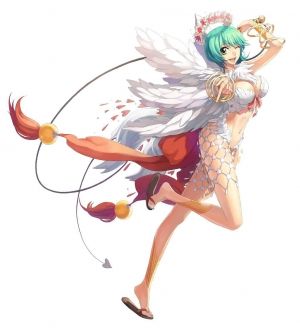 The Wanderer class is the female performer class in its third class form. They are primarily a support and disabling / debuff class that is also capable of AoE ranged damage. They also have some magic / MATK based capabilities. They are more used for WoE situations now, but they can also provide unique party buffs that make them a worthwhile member to have in PVM parties (mainly the Dancer skill, Gypsy's Kiss, which lowers SP cost and provides more SP to party members). This buff is extremely helpful for classes with low Max SP, character builds with low INT, skills that depend on SP for damage (like Guillotine Fist and Dragon Breath), or classes that tend to have to spam high SP cost skills. The Wanderer is provided with an array of disabling skills that can quite effective in WoE. They also have access to decent MATK weapons (unlike their male counterpart, the Maestro), which allows them to make better use of the Metallic Sound skill, although this spell is still fairly weak and has a long cooldown.

The Wanderer also has a powerful AoE skill, Severe Rainstorm, which if geared properly, can dish out some hefty damage, but at a high SP cost (which is why high INT is strongly recommended).

Changing into a Wanderer from a Dancer or Gypsy requires the player to complete a number of tasks:

After completing these tests, the player will be transformed into a Wanderer. The journey begins in Lutie!

Severe Rainstorm is the main leveling skill for the Wanderer class. It is a ranged AoE that showers a selected area with a volley of arrows. The damage is based on several factors including DEX, AGI, ATK, the bow and arrow used, and the element enchanted to the bow/arrows.

DEX not only adds to ATK but also adds damage to Severe Rainstorm as a multiplier in the damage formula, and so does AGI. However, depending on the character, one may choose more of either AGI or LUK for status immunities or AGI for Slow Grace in WoE. INT increases the effectiveness of Gypsy's Kiss and Max SP/SP Recovery (as Severe Rainstorm uses a whopping 120 SP each use)). The 77 minimum LUK by level 150 is for an Arch Angeling card's effect (Doubles HP/SP regen if base LUK is 77 or higher). The LUK also adds an amount of Perfect Dodge and ATK which are helpful with Severe Rainstorm.

Skills-wise, players using this build can invest in the same party buff skills as the Party Support build, and are not too different from full support builds.

The primary function of this build is to buff party members as much as possible with Gypsy's Kiss by having very high INT and having high VIT for survivability while performing songs. The high INT/SP regeneration also help with the high SP cost of performance songs like Frigg's Song. Players can still get Severe Rainstorm with this build if they wish to, but the damage will be lower since stat placement wont be focusing mainly on DPS. Also Severe Rainstorm requires a bow to use, which means players won't be able to perform songs if they are using it (many players will switch back and forth between Whip and Bow in a party).

Skills to invest in:

A sound damage Wanderer specializes in using Metallic Sound and Reverberation to deal damage. These skills are very SP-intensive and the damage is heavily based on MATK, so INT is a priority. This is an advanced build, and not recommended for beginners due to the cost of the equipment and the leveling difficulty.

As a Dancer/Gypsy: Either solo with Double Strafe and/or Arrow Vulcan, or use Gypsy's Kiss to support a party.
Low Level Wanderer: You can use Severe Rainstorm, or continue to support parties with Gypsy's Kiss.
Level 125+: By this point, you should be able to deal a strong Metallic Sound and Reverberation.
Level 150+: It is probably becoming difficult at this point to kill anything with sound damage skills, due to poor game design from Gravity. Pair with a Priest to Lex Aeterna your damage, or support Bio4 parties with Frigg's Song and Gypsy's Kiss.

Sound Amplifier [1] used to be a must-have for this build, but

Emerald Earrings [1] became a very useful alternative that doesn't increase Metallic Sound SP cost and lets you get some variability in your build by making Arrow Vulcan useful. Your Metallic Sound will still deal useless damage without any of those tiems.

The auto-attack wanderer specializes in melee combat with a whip.

As a dancer/Gypsy: You can either Double Strafe constantly at high attack speed, or you can play around with whipping things at a moderate attack speed. Arrow Vulcan still works, and nobody will complain about your Gypsy's Kiss in a party, either.
Early Wanderer: Your goal is to get a pair of

Temporal Agi Boots [1] and Swing Dance on as soon as possible, to massively increase your attack speed. This will allow you to begin melee-attacking things with auto-cast gears equipped (such as

CD in Mouth or

Advanced Ring Of Flame Lord) at a decent ASPD (around 188+ with swing dance).
Level 125+: You should be hitting your stride here, with 193 ASPD and a array of auto-cast gear on.

With the Rock Ridge update, the Hippie set was added, which increases critical damage from early levels.

This is by no means a complete collection of gear available. It is merely just suggestions based on some of the more popular gear options as well as some of the lower tier options for players with a lower budget.

Skills in a same group don't stack and will override each other (see Group A Songs and Group B Songs). Group B skills can only be removed through special skills such as Clearance, Lion's Howl, Destruction Song, etc.