The guild system of Ragnarok Online was made to allow the formation of communities with guild members and to form the basis to prepare for the War of Emperium.

Located in Prontera, (prontera75102), the Guild Office is where you can purchase Emperium as well as exchange Guild Dungeon Coins for PVP consumbles, PVP weapons, and PVP equipment.

Speak to the Guild Coin Trader to exchange

Lesser Guild Muffler and other equipment, 1000 Guild Dungeon Coin for a

Lesser Guild Arc Wand and other weapons, or 2 Guild Dungeon Coin for a

If you have obtained an Emperium, and have it on the character you want to make the guild on, create a guild by typing /guild "guild name". The character you made the guild on is now the "Guild Master." Once you have made a guild, the name and who leads it cannot be changed (Unless there's something that goes against the TOS, in which case Staff may either change the name and ask you to come up with a new one, or disband it).

Kick all guild members, then type /breakguild "my guild name" as the master of the guild. 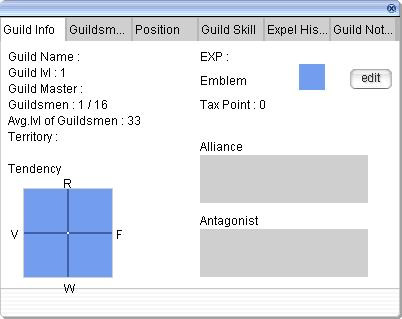 General guild information, such as the current number of members, number of online members, leader, and guild level, is displayed here. Alliances are also listed here and the guild leader can remove alliances by right clicking an allied guild name. The tendency feature currently does not work.

When your guild has a castle, you can also use a direct teleport there for a fee (not available during WoE) and check the castle economy and commerce.

All guild members are listed here. The leader is always first, with other members being ordered according to their title. Online members will be highlighted here. Members who have been taxed to provide the guild with experience can show the amount contributed as well. For the guild leader, titles of each member can be modified from this tab. Leaving the guild is also available by right clicking a member; guild members and members given the right to do so (via title) can kick anyone, while others can only kick themselves.

It is also possible to change Guild Leaders from this Tab.

A total of 20 titles are available and can be set here by the guild leader. The order of titles here will influence the order of members in the Guildsmen tab. The permissions to invite players, kick members, or access guild storage is also given via titles.

The guild skill can be put in the Skills Bar, that way you can also check for the delay/cooldown.

A list of recently kicked members are displayed here.

The guild leader may write a two-line guild notice (one short and one long) that will be displayed to each member upon logging in or switching maps. Note that the second line is often overlapped by the chat box scroll bar, so a short and concise notice is preferable.

It is possible to change the Guild Master from within the Guildsmen Tab.

Guild Titles are set by the Guild Master. They are used to set Guild Tax levels, and special names which can be entered in after a character's name. They also allow the Master to delegate various powers to other members such as inviting new members into the guild, kicking out members, or assigning who may access the guild's storage.

Guilds can also have their own personalizied "emblem." An emblem is a small picture which can make it easy to identify members, especially in WoE. Emblem Creation:

The amount of members a guild can hold is 16 (including the Master) by default. This limit can be increased via the Guild Extension skill up to a maximum of 56 members. Note that there are only 20 Guild Title slots, so grouping members into one or more "default" titles may be necessary with larger guilds.

Guilds, like characters, have levels. Guilds gain levels by members who donate their base experience through taxes. After a guild gains a level, one skill point is obtained, which can then be used on a variety of guild skills.

Guilds have certain skills which can be used in or outside of WoE. All "Active" skills can only be used by the Guild Master.