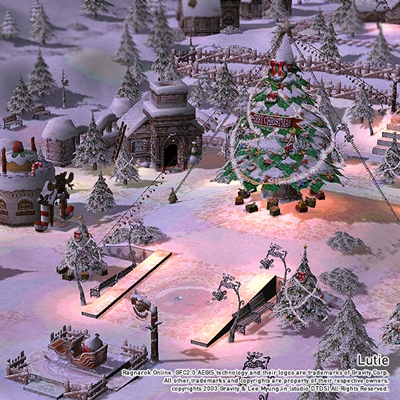 A Town of Eternal Christmas. Lutie is the Christmas town of Ragnarok. NPCs such as Santa and a snowman can be found here, along with winter/Christmas themed monsters and buildings. The entrance to the Toy Factory can also be found in Lutie.

To get to Lutie, talk to Mr. Claus aldebaran223222, who is located in the north-eastern corner of Al De Baran. He will offer to teleport you to Lutie Field at no cost. The field's northern portal leads to the town.

Lutie was discovered not long ago by a lone adventurer that wandered into an endless land of snow, and stumbled upon this village. For centuries the residents of Lutie have isolated themselves, gathering all they needed from hunting around their small village. Along with hunting, the residents of Lutie work everyday in the Lutie toy factory. Visitors to Lutie have often commented on the singing and soft thump of hammers as the workers cheerfully build toys of every shapes and sizes. Recently, an evil man, Antonio, who was bitter when he lost the election for town mayor, stole all the toys from the factory. Citizens of Lutie, who worked to bring joy to the children, became desperate and contacted the Kafra Corp who was happy to help and made it possible for Lutie to bring toys to the happy children across the world. Lutie, which can be reached with a Kafra's assistance, has a landscape which can be seen nowhere else. 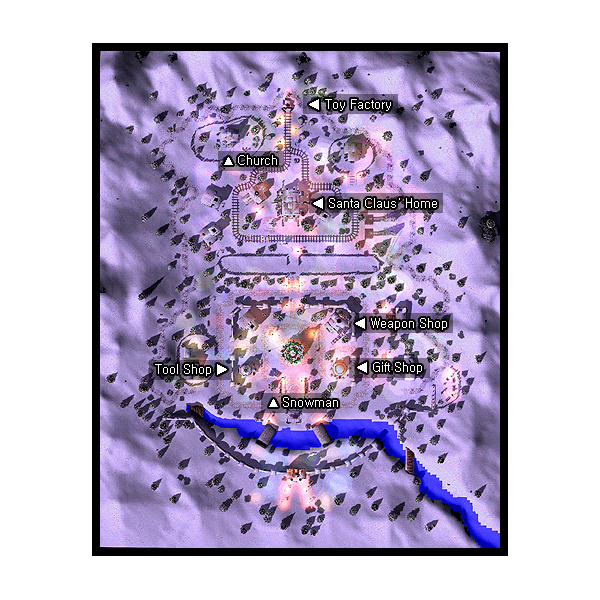 Santa Claus NPC is located in Santa Claus' Home. Off holiday season, he is just a background NPC that introduces himself, then tells you how you can leave Lutie for Al De Baran. During the holiday season, he serves as a trade NPC. He tells you the dilemma that he and his Santa army face against the Antonios, rogue Santas, that have cut holes in children's stockings. His request is that you vanquish them and he will reward you. For proof of your defeat over some Antonios, he will give you 1 Gift Box for 3 Red Stocking with Hole (?forgotname). The first time you talk to him during holiday season, he will give you a small Christmas gift as well, which could be cake, candy, candy canes, etc.

A colorful dungeon filled with Christmas themed foes such as Cookies., who resemble elves, and sentient Myst Cases. It is notable for having messages on the map, such as "I <3 U". The dungeon is located at the very northern part of Lutie and spans 2 maps. It is also home of the MVP: Stormy Knight.