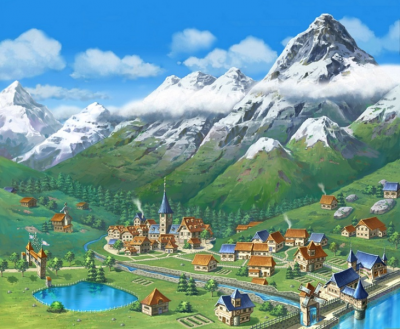 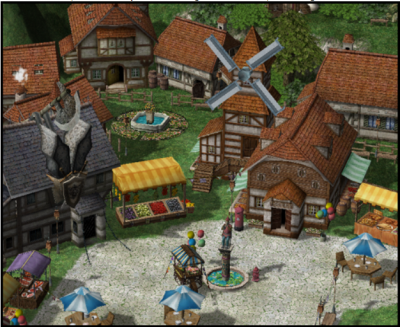 “No one asked anyone where they came from, what they did, and how they got here...”

However, Hugel is now the eye of the storm. As pursuers who seek Odin Shrine’s relics, Gigantes, and Ymir’s Heart appeared, and the airship route opened, Hugel’s peace and isolation has come to the end. People in Hugel, especially ones who left their hometown for specific reasons, are now desperate to hide their secrets from the outsiders. So they started holding parties with others more often than used to be, in order to keep their secrets…

In the far north east of the Schwarzvald republic, lies a small rural coastal village by the name of Hugel. Hugel is a quiet, yet festive fishing village, hosting a variety of games and activities for tourists.

Because of its geographic location, the city of Hugel grew much different than the other Schwarzvald cities, being seperated by both Thanatos Tower and Abyss Lake. Because of increasing attacks on travelers, going by Airship is possibly the safest way to enter Hugel.

Adventurers visiting Hugel can enjoy many different things. Those interested in adventuring can take a short boat trip from the eastern docks to Angrboda island for 500z to where the remains of the great Odin's Temple stands.

Supplies and storage services can be located near the center square in town. A Cool Event Corp NPC will handle storage and saving services in Hugel, as Kafra is unable to staff such a far away place.

Hugel Tokens for their services.

Hugel offers a wide array of new equipment that may spark the interests of adventurers while they explore the the fields of Hugel, traverse the Abyss Lake or pay a visit to the Temple of Odin. 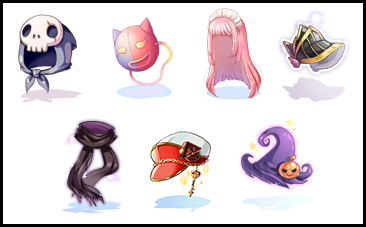 The Dragon and Soutane Sets 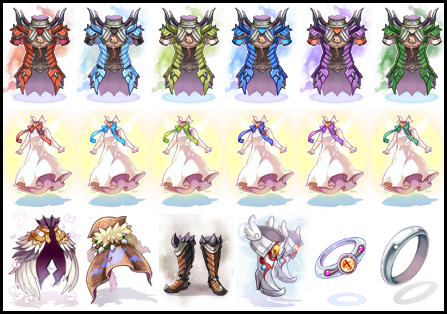 These are the Gears you can obtain within Hugel's domain that do not belong to a specific set, they all use the fever gear options for weapons/armor if they drop with options. They are also exclusive to Zero.

These are gears that were reworked (for some) in Zero to have different effects from its counterparts in Renewal. 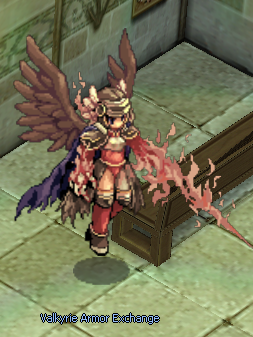 These are Special Valkyrie Armors that you can craft after obtaining various ingredients within Odin's Temple. Talk to the Valkyrie Armor Exchange NPC: Valkyrie's Disciple at que_bingo5180 and deliver the required materials in order to craft the armors.

By accomplishing the tasks of the residents of Hugel, you will be rewarded with

Hugel Tokens, which can be exchanged at the Hugel Town Hall,

10 Hugel Token can be exchanged for

Before you can exchange Tokens, you have to complete the Welcome to Hugel quest.

The Hugel Gift Certificates can be used to upgrade certain headgears into improved ones and the Hugel Tokens can be used to enchant various stats on them. The required headgear must be +7 or higher to be able to be eligible for exchange.

Talk to Gift Manager Seo to create your desired headgear.

The Hugel Souvenirs can be enchanted with a specified number of

Hugel Gift Certificate. Talk to Flame Designer Rita at que_bingo6128. Enchantment reset is possible after enchanting the item once/twice, at a cost of 300,000 zeny.

These set of gears are obtainable from the

Odin Reliquary and are enchantable with various stats. The armor accompanying the set has 6 types (each prioritizing one stat and its effects) and will offer bonuses that may suit your adventuring needs. 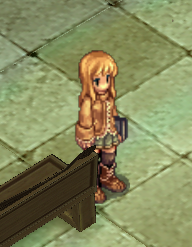 To add various stat enchantments to your Soutane Set (minus the ring) you can approach Susan Grey at que_bingo4680 and she will require items depending on their refine levels.

All non +9 gear will need

5 Rune of Darkness, and

1 Daily Coin to enchant. These also have better enchantments on the 2nd slot over the non +9 gear.

The Dragon Set has similar qualities with the Soutane Set, as there are 6 types of Armor that will boost a player's stat of choice. The 6 Armors are crafted while the remaining pieces are obtained via

Crafting and Enchanting the Dragon Plates

To craft the Dragon Plates, approach Redhead at que_bingo43116 and she will ask for various dragon-related materials to craft your Plate of choice. You can pick the Memorial Dungeon Route or the Dragon Material route to craft your armor.

Enchanting the Dragon Plate (the other pieces do not have any enchantments), will require a

Wild Dragon Power, obtainable from either the

Dragon Treasure or you can exchange various materials for one by talking to Bluehead at que_bingo41118.

Wild Dragon Power to pop a menu for option rolling (Uses the Fever Armor Enchant Option Table). If you wish to change the options simply use another

If you want to obtain

Wild Dragon Power from Bluehead, He will ask the following materials. 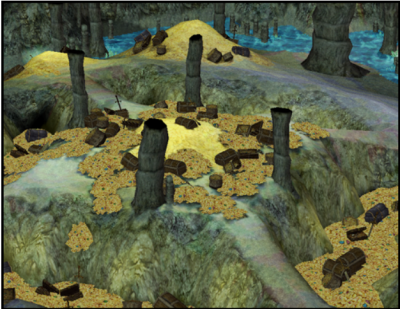 Travelers can find Abyss Lake in the northern part of the Schwarzvald Republic. The only lake in the Republic is a natural wonder whose beauty has warmed the coldest of hearts and inspired hundreds of Bard songs. The shimmering lake surface, the surrounding green fields, and the foggy mist form an astonishing vision through all four seasons of the year. The lake's clear, pristine waters seem to run endlessly into the earth, and no one is sure of the water's actual depth. A quint island lies in the center of Abyss Lake, covered with dark, earthen rocks that appear purposefully arranged, almost as if to obscure something...

Although it is a beauteous spectacle, human visitors rarely come to Abyss Lake. The human inhabitants near Abyss Lake were all long since driven away by combined threat of strange creatures, believed to be guardians of nature summoned by the gods, and the dragons that have been summoned by Demon King Morroc. Even as people fled from Abyss Lake, Morroc's dragons grew more numerous and aggressive, immediately attacking travelers and airships that dared to come near.

The Abyss Lake Dungeon consists of three floors, each floor becoming increasingly difficult. The final floor is a wide open space crowded with lots of monsters. Its recommended that if you wish to come to this place, that you have a sizable or very well coordinated party. On this final floor, the boss dragon Detardeurus will appear to stop you from taking his treasures. 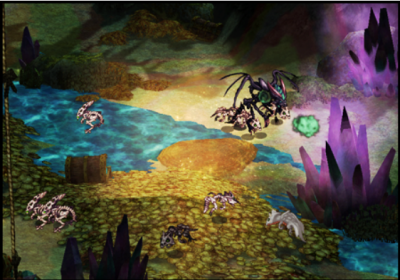 Located below the 3rd level of Abyss Lake, the unholy energies emanate from within its depths. The sickening energy and aura can be felt from its powerful inhabitants that includes new versions of Ferus and Acidus. If you are up for a challenge, test your might with the a new version of Detardeurus. 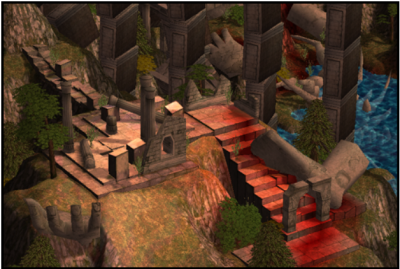 Long ago, there was a place where people had served God.

He created human beings and gave them everything.

So the people built a shrine and began to perform a religious service to appreciate him...

The Odin Temple was built ages ago by an ancient civilization who worship the god of lightning. The temple was massive, almost spanning the size of the island. The people gave everything they could to make sure that the temple was perfect. However, their devotion and loyalty was all in vain.

Civil war broke out as the various leaders vied for the favor of Odin. Soon enough, destruction and death came as the warring factions nearly wiped each other out. The survivors slowly abandoned the island in search of a better future elsewhere.

Today, Scholars and adventurers have made their way back into the island. The ghosts of the past as well as the present now stand guard to the greatest secrets of Odin. It is said that the ghost of Giantes still remains within Odin's Shrine.

Listen to the unfolding of the events in the Ruins of the Temple of Odin, right from the mouth of the valkyries themselves. 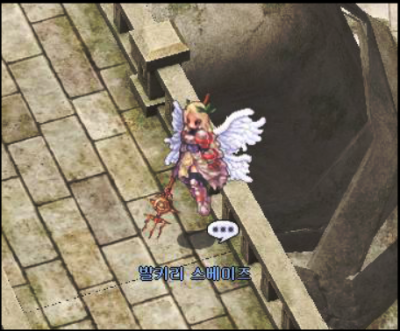