This page lists recommended leveling spots, with the maps and monsters associated with them. Leveling spots are optimized by only killing monsters that do not have an EXP penalty at the character's current level. More information on this topic is in the Experience page. Adding suggestions onto the page is highly appreciated.

The Eden Group leveling quests are a great place to start. Each character can undertake these quests after joining the Eden Group.

Every character starts off by auto-attacking (ctrl-click, or clicking with /nc activated) monsters. As the character gains job levels to acquire skills with, they can start to utilize new skills for more efficient combat and overall damage.

Newer players often choose an AGI oriented build for leveling (does not apply to Mages of course), as it is more potion-friendly and uses less funds and supplies in general. AGI oriented builds focus on faster ASPD for meleeing monsters, and relies on some degree of FLEE to avoid getting damaged altogether. It is recommended for AGI builds to avoid maps with aggressive monsters.

Conversely, more experienced or well-funded players tend to choose a VIT oriented build, and will choose to use AoE skills on aggressive monsters. Note that in the higher levels, VIT should not be viewed as the "opposite" of AGI. Many builds can often utilize both stats, and higher level characters always utilize VIT for survivability, and AGI becomes more of a offensive / status resist stat instead of a defensive stat, which is still important.

Aggressive (also referred to as "aggro") monsters are monsters that will automatically target and attack the player. Passive monsters, the opposite of aggro monsters, do not attack the player unless the player hits them or uses a skill on them first. Generally, aggro monsters are good for quick leveling by mobbing them up and using AoE skills. This leveling tactic is more expensive and will require much use of Healing Items however, and new players may not be able to afford them. Players can also use Fly Wings to locate mobs quicker.

Equipment is obviously an important part of improving the effectiveness of a character in battle. Some general gear recommendations are in the Equipment article and Kingdom Guild Gear Exchange. Once the player is more comfortable with gameplay and has more funds, they can start looking into more advanced gears.

Acolytes are able to memo a map, and warp back to it with the Warp Portal skill. This lets a player to quickly go back to the leveling area. Non-Acolyte characters obviously will not be able to do this. However, many veteran players can have a second account with an Acolyte in it that can memo a particular map, and warp the character they are leveling to the map. Having a map memo-ed is great for when a (low Weight Limit) character has to restock supplies, or if choosing to use an inn for full HP / SP recovery. Some players may find themselves leveling quick enough that they are already out of the level range of the map before they need to restock however.

Map recommendations are sorted by the max level a character can level at the map at. Max level is determined by 10 levels (penalty) above the lowest level common monster. Depending on your gear/class you can start leveling earlier at some places. General rule of thumb is that when the EXP gets too slow for your liking, try moving on to different maps and explore! :)

After the tutorial you'll be around level 10. :)

You can refer to the table below for recommendations or you can also refer to the World Map in-game and pressing Tab to bring up the monster level overview per map.

Take a look at the quests from Eden Group and hunt monsters for hourly turn-in quests. 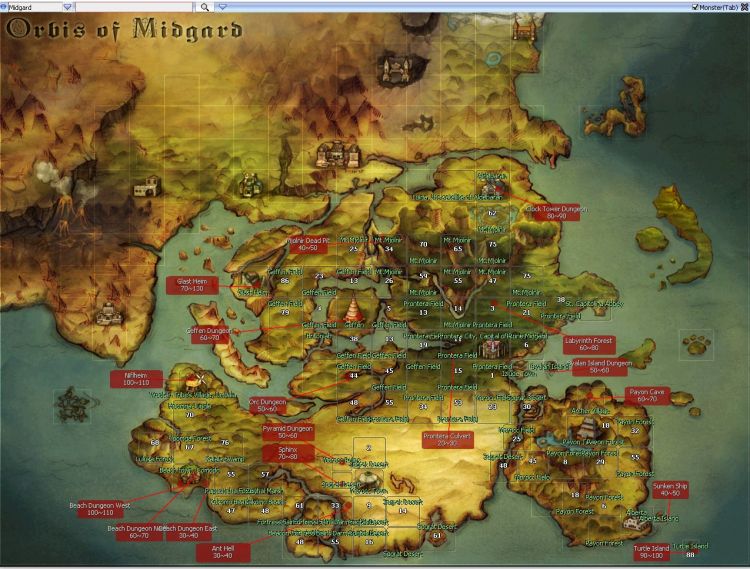 Note that Yoyo Tail is also used for one of the Level 31+ Kingdom Guild Turn-In Quests.

Note: Bug Leg is also used for one of the 41+ Kingdom Guild Turn-In Quests.

"Healing" an Undead element monster to death is also known as "Heal Bombing". Note that Undead is also the name of a race and this can be confusing. For a complete list of Undead element monsters, using our Monster Database is highly recommended. For any support oriented Acolyte / Priest characters, usually it is much easier to party with one friend and share the EXP. For more information on the Heal skill, please see the Heal article.

A Priest skill, Turn Undead, also can only be used on Undead element monsters. This can be applied to the following maps as well.

Certain monsters (usually plants) are immobile. This is a great advantage for new Archer and Mage players, as these classes have ranged attacks or skills, and can "snipe" these monsters while being out of the monster's range. The monster will not be able to hit the character and the character will sustain no damage. Positioning right outside of the monster's range is important of course. An Archer can simply use their regular attacks (ctrl-click, or clicking with /nc activated) on these monsters, or use a skill such as Double Strafe. Mages will have to use a ranged skill such as Fire Bolt or Cold Bolt.

For a complete list of immobile monsters, using a monster database (like http://db.irowiki.org/ Monster Search) is highly recommended.