Battlegrounds is a PVP system in which two teams compete towards specific objectives in various arenas, and has unique equipment and consumable rewards for participation. To enter the Battlegrounds atrium, speak to one of the following Maroll Battle Recruiters:

To leave the atrium, players can talk to the Teleporter NPC bat_room148150 who will send them back to the town they entered from.

To queue for Battlegrounds, use the Battlegrounds Window in the listed in the Basic Info Window. Players can only queue for battlegrounds alone as teams are randomly assigned.. The player may join battlegrounds from anywhere using @joinbg. After the match has finished they will be teleported back to their save point.

Each team has a crystal to defend. The enemy team has to loot the crystal from the other team and bring it to their base to get 1 point. The team who gets 3 points wins the game. The player carrying the crystal cannot use items or skills and loses HP/SP over time. Protect them!

First team to get 20 kills wins.

There are 3 bases: North, Center and South. The teams have to capture a base to get points. Bases are captured by standing near the flag. The team that has the most players in that area slowly captures it over time. First team to get 100 points wins.

Rush is a WoE FE mode, with both teams spawning at the entrance. Rush with your team to the Emperium to capture the castle. If the defending team can hold the castle, they win. The attacking team has to break the Emperium to win.

Each team has a base with places to bring the stones to. The 6 stones spawn in the middle of the arena. The goal is bring the stones to your base to get points. The player carrying the stone cannot use items or skills and loses HP/SP over time. You can steal the stones from the enemy base! First team to get 100 points wins.

Valor Badges are the reward items that can be obtained in battlegrounds. They can be traded in for a variety of different equipment. (Badges can be stored in Master Storage and freely be used by other characters within the Master account.)

You will also get

2 Daily Coins for your first win of the day if you have not yet reached your daily coin limit. 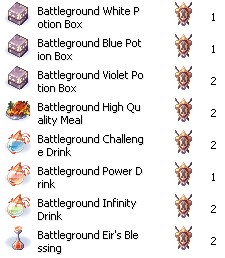 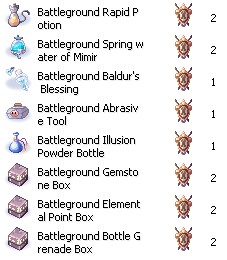 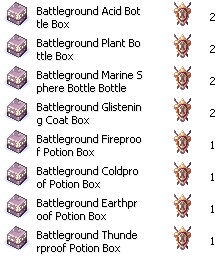