The daily missions can be done twice a day per master account. You will be given

Daily Coin per Daily Mission you accomplish. The items/monsters the quest will ask you to obtain/kill will be random, the only difference is for players with a base level of 70 or higher, you will be given tougher challenges VS players below 70.

You can only get a maximum of

4 Daily Coin per day, that means you only need to do 2 of the daily missions to complete your daily allowance (Assuming you are above 70). You can only do each daily once per day per MA as well. 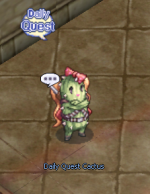 The Daily Quests NPC, Lady Prickly can be found in the Eden Group at moc_para013536. 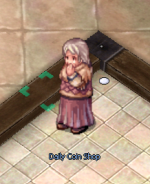 This is part of the event missions which will only be available for a limited amount of time.