Event Missions are Seasonal Events in Project Zero that will only be available for a limited amount of time.

Event Coin for participating in Event Missions, with a maximum of 5 per day per Master Account.

Event Coin can be traded at the Event Coin Shop NPC at moc_para013922. 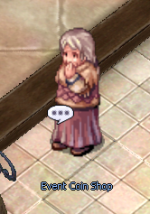 Essence of Powerful Soul, along with other materials, can be used to create powerful MVP Eggs:

The World Boss mission is a time limited event that will require the forces of many adventurers to save the Tree of Yggdrasil from the powers of corruption.

Current instabilities in Rune-Midgard sparked the interest of a few brave acolytes to go and investigate - what they found surprised everyone: corruption! Corruption in the roots of the Yggdrasil tree, which are affecting all the realms. Will the brave adventurers of Rune-Midgard be able to defeat this evil and save the universe?

Required level: Base 50 and above

The boss fight is limited time fight, in which a few unique phases and mechanics have to be dealt with in order to defeat the corruption. The fight triggers in the following schedule in UTC time:

During odd days of the week ( Monday, Wednesday, Friday, Sunday)

During even days of the week (Tuesday, Thursday, Saturday)